10 Tips for Shooting Video in Indianapolis

Indianapolis has much more to offer a corporate video shoot than just its Midwestern hospitality. For example, the city is home to one of the largest convention centers in the country, providing the perfect meeting venue for large corporations. Before you head out to Indianapolis, however, make sure to check out these tips from some of our own represented Directors of Photography:

If you’re flying into the city, you’ll be coming into an award-winning airport. The Indianapolis International Airport has been voted ‘Best Airport in North America’ by Airports Council International five out of the last six years. Crews Control Director of Photography Eric Seguim-Arnold recommends booking a lunch or dinner at Harry and Izzy’s on Concourse A, a personal favorite of his.

The state of Indiana is very easy to work with, as they do not require or issue any permits for filming. Some state and city-owned properties do require permits, but you can find the appropriate contact using this website.

Like any large city, traffic is a problem during rush hour. You should make sure to avoid the northeastern areas including Carmel, Fishers, and Noblesville during these times, according to Seguim-Arnold. Luckily, it is difficult to get lost in Indianapolis, thanks to Interstate 465 circling the metro area.

“Weather goes from very cold to very hot and everything in between,” says Crews Control Director of Photography Lee Nassau. During the winter, you’ll face precipitation 51 percent of the time, so make sure to bring a heavy, warm coat.

Seguim-Arnold describes downtown Indianapolis as easily navigated. There are plenty of dining and entertainment options in addition to a terrific cultural urban state park. This park includes the NCAA Hall of Champions and a premier concert venue, making it the perfect place to capture b-roll that truly shows the city’s culture and personality.

For the best place to film the cityscape, Seguim-Arnold suggests the White River, right across from the Indianapolis Zoo. “This may require a parking fee at the Zoo if it’s open. If it’s closed, you can generally drive right in. You then need to walk to the edge of the river and shoot back toward the city. This gives you the river in the foreground with the city behind, including the NCAA Headquarters, the JW Marriott and Lucas Oil Stadium,” he shares.

As one of the largest convention centers in America, the ICC serves as a prominent destination for large trade shows and conferences. Events range from the 2012 Super Bowl to the Indy Big Data Conference that includes speakers from major corporations like Google Cloud and Procter & Gamble. It’s a great set for any corporate video. 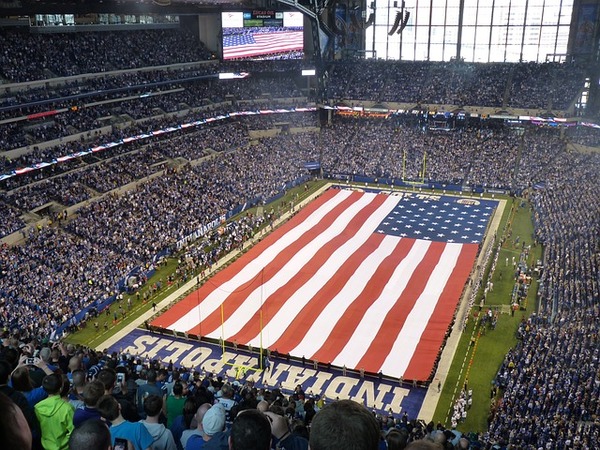 Lucas Oil Stadium is a great place to shoot a video or take in a great game.

A majority of the hotels downtown are connected to the Indiana Convention Center by skywalk. This unique system allows visitors to explore Indianapolis without ever even having to step outside. This is especially convenient in the winter when temperatures can average below 20 degrees. You can find a map of the skywalk connections here.

A trip to Indianapolis isn’t complete without a meal at St. Elmo’s Steakhouse. They’re famous for their steaks, but both Nassau and Seguim-Arnold recommend the signature shrimp cocktail made with fresh horseradish that is ground daily.

Looking to take a break from your corporate video shoot? If you’re visiting the city over Memorial Day Weekend, be sure to check out the Indianapolis 500. Visitors come from all over the country to watch the traditional race – this year marks the 101st running! It’s the perfect time to capture the spirit of the city when it’s full of excitement and visitors.

If you need to find a great crew to help you shoot the perfect corporate video in Indianapolis, Indiana, make sure to click here for a free quote!