Savannah, GA is one of the most visited cities in the Southern region of the United States. Located in Eastern Georgia along the Savannah River not far from South Carolina, there are many things that draw visitors from far and wide. We talked to one of our Production Managers and former Savannah resident, Ashley Brook, about how to make the most of your next video shoot in Savannah:

While Savannah is known for its award-winning bicycling, that might not be the best option for a crew with lots of equipment. Savannah is a Bronze-Level Bicycle Friendly Community, so bicycling is recommended while enjoying the city on your own time. However, in order to get your equipment from one location to another, renting a car or taking one of the city’s many shuttles is ideal. There are a variety of transportation options within the city. Also feel free to jump on the River Street Streetcar to get a real feel of downtown, or take a ride on the Savannah Belles Ferry.

Seeing the Wormsloe Historic Site for the first time takes your breath away. The 1.5 mile-long Spanish moss canopy is iconic to Savannah and a great shot to include when filming. “Wormsloe is what you think about when you think about the South: romantic, muggy, and covered in Live Oak trees.” Brook said “One of the most famous scenes in Forrest Gump was shot there!  Savannah is a location scout’s dream with Tybee Island on one side, history filled squares with hanging Spanish moss on the other and locals who would happily serve you a Sloe Gin Fizz while telling you the secrets of the city.” 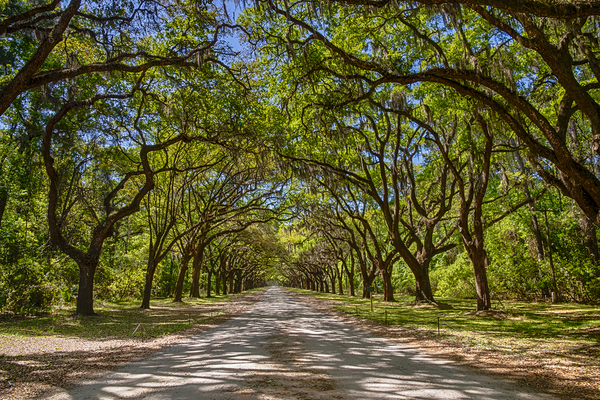 Wormsloe is the perfect place to go to get a true feel of the city.

Anyone who has ever visited Savannah will tell you that you need to take a trip to Leopold’s. This famous ice cream shop was founded in 1919 and keeps all of their recipes a secret to this day! Take a break from shooting to enjoy a sweet treat or grab a great b-roll shot outside the shop.

Savannah has a very stable climate as one tends to expect from the southern region of the U.S. Winters are pleasant and short, with very little chance of snow. Summers, on the other hand, are long and steamy. The humidity is through the roof, so be prepared when you’re shooting. Per Brook, “The humidity will make your hair curl, literally. The best time to go to Savannah would be in the spring or fall.”

6. The Cathedral of Saint John the Baptist

The Roman Catholic Cathedral is a true city landmark. The structure contains 81 stained glass windows and is over 200 feet tall. The astounding architecture is a nod to Savannah’s Irish heritage. A shot outside of the cathedral truly captures a great staple of the city.

As a southeastern city, you can expect a lot of sun in Savannah. It is also important to plan for rain. August is the wettest month, while November is the driest. 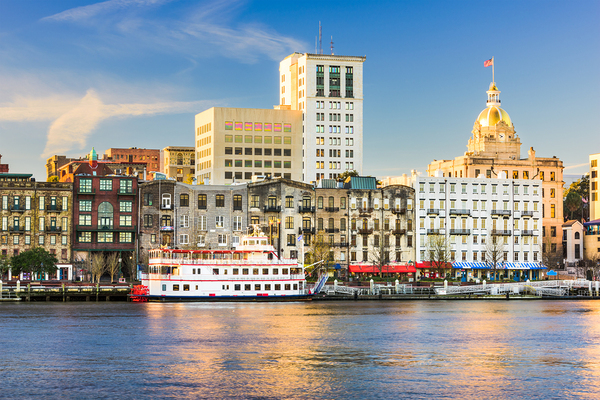 If you can, avoid the rain for amazing shots of this beautiful city.

Savannah is the only large Southern city that was left essentially unscathed during the Civil War. Because of this, there are plenty of historical sites and astonishing architecture left standing from before the Civil War. There are several monuments scattered around the city which you are bound to run into as you make your way through it. The Historic District is a stunning place for any type of footage.

For filming permits, the state of Georgia does not usually issue permits unless public property is impacted. Permission must be issued whenever shooting on private property. For more information on shooting permits in Savannah, click here.

This fountain is the ultimate gathering place for everyone in Savannah. This is one of the most photographed places in the city and an absolute must-have shot to get while in Savannah. 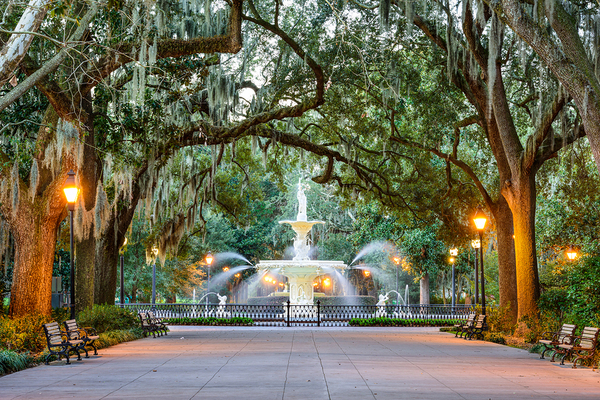 The Forsyth Park Fountain is an iconic landmark that’s perfect for any shoot in Savannah.

Savannah is known for its delicious southern food. Enjoy fried chicken, grits, brisket, and many other delectable delights while visiting the city. Be sure to check out some local favorites like The Olde Pink House and Mrs. Wilkes’ Dining Room. Brook recommends “but don’t forget the street fare. A local favorite is Zunzi’s, carryout-only with a wait out the door before they open. Their giant chicken sandwich ‘The Conquistador’ with a special sauce will fill you up for the entire day, their falafel is also excellent!”

If you’re in need of a crew near Savannah, make sure to click here for a free quote.