North Carolina has so much to offer producers and video crews wishing to shoot there. Raleigh, NC, specifically is central to many ideal locations for shooting all types of videos. How do you make the most of a shoot in Raleigh, the City of Oakes? Here are our top ten tips:

Most producers think of North Carolina as a lovely rural state with the chance to shoot both mountains and the coast. This is exactly right, and it’s I-40 that connects them. When you’re trying to zip between locations during rush hour, however, it can be tough. I-40 is the primary link between Raleigh, Durham, Chapel Hill, and Research Triangle. Rush hour is usually slow between these points, so make sure to allow enough time to travel so you don’t ruin your shooting schedule.

Uber is definitely your friend in Raleigh if you want to avoid driving a car. There are cabs available around the city, but not as many as you’d find in a city like New York. Uber also lets you plan travel from the airport to your hotel or office in advance, making it extremely convenient.

There are hundreds of great places to eat all over Raleigh. Be sure to try the traditional North Carolina barbecue and as many of the plentiful, amazing restaurants the city has to offer.

Shooting in Chapel Hill presents a familiar picture to the audience. Producers will often take a trip here while shooting in Raleigh for great b-roll shots of the area’s signature sights.

The shooting laws are very laid back in Raleigh. If you are in need of a permit to shoot in certain locations, you can go to the State Film Commission. If you plan on shooting on state house of capitol grounds, make sure to check with the Capitol Police in advance as well. If you want to shoot on any private property, don’t be afraid to ask permission. People are generally very welcoming in Raleigh.

There are three major universities found in Raleigh: North Carolina State University at Raleigh, Duke University, and North Carolina Central University. All of these can be found in the area known as the ‘Research Triangle.’ This location provides a great opportunity to get a variety of shots from these well-known schools.

Other than the three major universities discussed above, there are also several medical, pharmaceutical, and high technology schools. Raleigh has the sparks of a college town and that provides a great deal of diversity. 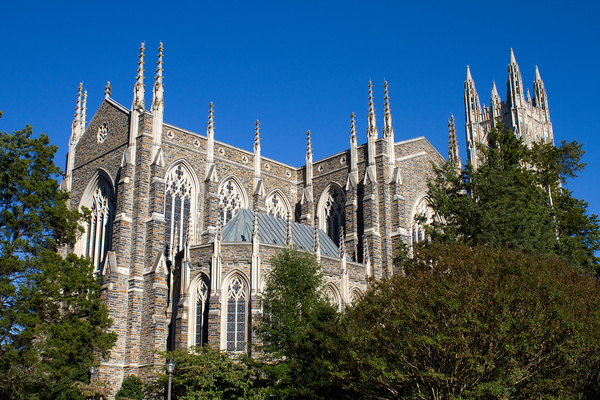 Beautiful sites such as the Duke University Chapel are bountiful in Raleigh.

Raleigh has a rich history to appreciate. There are many historical sites in the city, especially from the Civil War Era. These sites are extremely scenic and easy to shoot. Winters are mild and short, much like the rest of the Mid-Atlantic. Fall is the perfect time to shoot at outdoor sites such as these.

Most of the time, a trip to Raleigh overlaps with a trip to Durham. This town presents many of the same qualities and quirks as Raleigh with plenty of recognizable landmarks. The whole area presents a variety of interesting locations for b-roll, including Duke Cathedral, Durham Central Park, and the Nasher Museum of Art.

Southern hospitality is plentiful in Raleigh. The people are extremely friendly, professional, and a pleasure to work with. They truly make the shooting experience wonderful for visitors.

If you’re in need of a crew near Raleigh, make sure to click here for a free quote.