In Studio or On Location: What’s the Right Call for Your Company Video?

Posted by Cricket Capucci on November 8, 2017

When it comes to producing a corporate video, should you bring your management team and/or employees to a production studio? Or should you ask the production crew to bring their talents and their gear to your office? Or should you both meet at a different location altogether?

Many times, the answers to these questions are among the most important decisions to be made in the pre-production phase of the video-making process. So what are the pros and cons of creating your video in a studio versus on location?

Easily the principal advantage of shooting a video inside a studio is the complete control over the production environment. There are never any concerns about inclement weather, unwanted traffic noise, aircraft sounds, or stray conversations from onlookers or others nearby. In addition, the production crew can regulate all of the lighting conditions so that every aspect of the scene is perfectly illuminated; and the audio that will be recorded will be clear, crisp, and free of wind noise.

Most production studios are equipped with some type of “green screen,” or colored wall which facilitates the display of video footage from another source. This process creates the on-screen illusion that the persons or objects being shot are positioned in front of a different background. As a result, the director can stage a shot where it appears that a spokesperson is speaking from a cornfield or employees are frolicking on a beach. The green screen even makes it easy to create special effects like a space background or a video game animation sequence.

Finally, there are several logistical benefits of an in-studio production. A studio generally has better access points for large pieces of equipment like cranes or light stands. An adequate amount of electrical power can be provided and plenty of outlets are available. And for a multi-day shoot, the lights and equipment can be left in position for the next day since the studio can be properly secured.

With all of these helpful features, why would anyone want to shoot outside of a studio? The biggest reason would be that it would be nearly impossible to replicate the company environment. Many businesses would prefer to showcase their offices, manufacturing facilities, warehouses, and other properties in their videos.

In addition, a studio can only create a finite number of background options (even with a green screen), and these backgrounds may be less desirable than a nearby location. Furthermore, there’s an authenticity of an on-location shoot that is nearly impossible to duplicate in a studio. (Think about it: when you’re watching a YouTube video, you can usually tell if the background is real or computer-generated, right?)

Other issues when producing a video inside a studio may include a lack of space. Even the largest studios are limited when it comes to recording certain activities or scenes which a company may want to include in its video. After all, it’s impossible to launch a rocket, erect a building, or fly a plane inside a studio. Also, the controlled environment of a studio may actually be problematic if a goal of the video is to promote spontaneity. This is especially true if the video features employees who may not be comfortable on camera and are more likely to appear at ease when speaking from their office desk rather than in a brightly-lit studio.

Finally, the cost of the studio.  Whether it’s your in-house studio or you are renting a studio you must figure the studio cost as well into your budget.

In truth, there are plenty of rational arguments for bringing a video crew to a location (or multiple locations) to record a corporate video. Perhaps the most persuasive one relates to cost, since renting out a studio for a lengthy shoot can get expensive. These expenses can increase if it becomes necessary to construct an intricate set inside a studio when a suitable location is available elsewhere.

Another advantage of on-location shooting relates to the “genuineness” of a particular locale. As the saying goes, “Reality is hard to fake.” That’s even truer when trying to simulate a structure with complex architectural details or an outdoor scene which has been weathered by time and nature. So for example, if the company being profiled cleans public areas, changes light bulbs on buildings, or refurbishes 19th-century paintings or furniture, portraying their work on-camera may be handled better at a real location instead of trying to reproduce this scene inside a studio.

If a location other than company property is required, a location scout provided by the production company can help find one. These scouts are incredibly knowledgeable when it comes to securing a specific type of background, terrain, or property. In many cases, the use of non-union labor or unpaid on-camera extras may be possible on location if their presence is needed, which could reduce production costs even further.

On the other hand, the inability to control the environment can make shooting a video on location challenging (or even nightmarish). Many a production shoot has been delayed or canceled by rain, wind, snow, or even clouds blocking out the sun. And lots of perfect shots or takes have been ruined by unwanted noise from airplanes, traffic, curious bystanders, or even building fire alarms. Lighting scenes adequately can also be tough in confined work spaces or outdoor areas where lots of shadows are present. 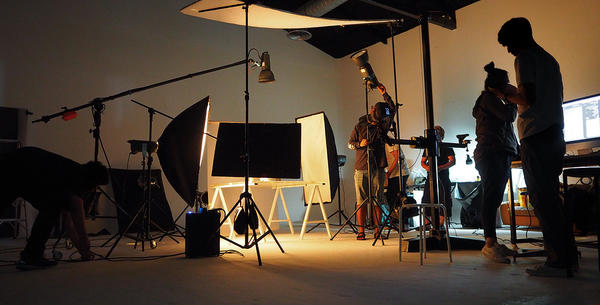 In addition, trying to move or position bulky production gear in tight public or office spaces can be logistically difficult. It may be impossible to utilize a camera crane or large lights in a cramped office or on a busy city street; and even if this can be accomplished, running power to this equipment (without shorting out a breaker or fuse) can be tricky. More generally, it can be a tall order to address the needs of a specific video script on location; for example, creating special effects in an office workplace is usually impossible.

Locations present other problems that usually aren’t associated with studio shoots. Many municipalities require filming permits to be obtained if production is to take place in public areas. Providing security during a shoot can be demanding; and if there is no storage facility available near the location of a multi-day shoot, all equipment must be packed up and hauled away after production concludes and then brought back and set up again the following day.

Go With the Pros

Whether you ultimately decide on a studio or an-on location video shoot, the one aspect that should always remain constant is the inclusion of a professional production crew. Their experience and skill can overcome numerous obstacles which can emerge while shooting on location, and they can streamline the entire process so that the production can proceed on schedule. For in-studio shoots, they can leverage their creativity and technology to help make your video unique and powerful. Think of a video production crew as a championship-caliber sports team; they’re equally exceptional both “at home” and “on the road!”

Need cost information on a location or studio shoot? Contact us today to get a quote.